M’s relationship with our brother was fraught. Having failed to kill us he decided that perhaps an easier strategy was to have us removed from the scene. Now I’m not saying it was deliberately planned, but when the opportunity arose he didn’t waste any time in allowing it to happen.

One day, aged around three, we were standing outside a pet shop with our brother looking down into a bowl with goldfish swimming around. A well-meaning lady came up to us and asked our brother if we were with him and he said No – he didn’t know us, so she took us off to the police station. I wanted to scream out to stop her – but was mute in the void and M wandered off innocently with the lady. After an exciting ride around in a police car for half an hour or so M eventually recognised our Gran’s house and we were returned safely home, much to our brother’s disappointment.

I remember us going to nursery school and M was very upset about being left by our mother. We sat on Auntie Coco’s lap in a back room full of stacked chairs, crying. On one occasion M had taken a snow globe – a present for Christmas, which was placed carefully in the serving hatch in the hall. When we returned to collect it at the end of the session it was broken. This was a traumatic moment – the loss of another dome shaped object. Perhaps this was a symbol of the loss of our mother’s breast to feed from (I’m sure that is what the Freudian’s would say).

At about this time I had another outing. We were on holiday at a camp near the seaside. There was a fancy dress party and for some reason our mum decided to dress us and my brother as ‘gonks’ – I was Gloria. Resplendent in something strange and a quoit on my head tied up with wool as makeshift hair. This was my crown – and my first time in public – albeit as a somewhat ‘joke’ character. I recall standing on stage and receiving the prize – the first one we had received and I was proud to have achieved it for us. Then as my crown was removed I slid back into the shadows.

Some time after we returned home our sister and I decided to do a paired cross-dressing exercise. I dressed in my mum’s skirt, tights, shoes – and I don’t know what else. My sister dressed in some of dad’s clothes – we must have been around 6 and my sister about 3 – or maybe slightly older. I obviously got my way on this occasion and managed to influence this outing – much to the surprise of the family as we paraded into the room. I think our parents were really not sure how to take it – but assumed it was innocent fun. My brother, however, was quite vitriolic in his condemnation. I was pleased to be able to express myself in this way and M was quickened by the experience. We knew at this moment that there was something special in this act. Was it a way of trying to recover our lost breast?

Whatever the underlying psychology may have been, it felt good for both of us and I enjoyed stepping out from behind the curtain and revealing myself.

At primary school we played more with the girls than the boys. I was guiding the thinking at this stage – starting to develop my influence and socially we felt much more at home with the girls than with the boys. M fascinated the girls one day by dropping his pants and showing them his tiny little ‘willy’. A bit embarrassing for us both – but we were too young anyway. This was when I felt most at home – I was amongst my own – even though I was calmly behind the scenes – but M had not yet been conditioned in the fixed ways of the world. This was to come later.

M was very fond of being with girls and felt quite excited by it – but was this jealousy or an heterosexual drive? This was a very early age – no more than eight.

M was developing an interest in how things worked which was ultimately to lead to his engineering career. He enjoyed building things with Lego and was developing a very good spatial awareness. I observed this with a quaint interest, as this is not one of my strengths, but I could see the benefit for us many years in the future when we integrated our complementary capabilities, reuniting the two halves of the perfect sphere.

This interest in how things worked led M to dismantle a fob watch belonging to our mother. It was smooth and silver with a glass face, black hands and Roman numerals. The watch was not working so mum gave it to M and he took it apart, fascinated by the workings. When he tried to reassemble it he could not, despite many attempts and this devastated the poor boy. He cried himself to sleep on more nights than I could possibly count over several months. Was this yet more sadness from the loss of the breast? Again I could do nothing to alleviate this suffering – even though I was the replacement – the end of his search – and yet he could not see through the veil as I reached out to comfort him – his sensations were closing off – and he was settling into the mould of rational boy. I was becoming more distant and sinking deeper away from his consciousness – further back into the netherland of the unconscious.

I did have a wonderful opportunity to appear on stage again – one of the highlights of our childhood. Our school was performing HMS Pinafore (a comic opera by Gilbert and Sullivan) which contains a sizeable female chorus of the admiral’s daughters. I had to wear a flouncy dress and also lipstick and blue eyeshadow. On the first night they slapped it on liberally much to my delight. I came out, after the show, with it still on and remember talking to mum in the playground sporting my new look and feeling really proud. On the second night they didn’t put much on and I was deeply disappointed and so I went back for more (not quite ‘Please Sir, can I have some more? – but something like it…) The teacher, no doubt wondering what this little rascal was up to, sent me away with a flea in my ear! Oh what devastation! Put firmly back in the closet I was learning how unaccepting the world is of those who do not fit the mould and I became more timid and secretive.

At around this time my mum bought some black shiny boots. The heels were fairly low, but they did feel good to wear. I used to go into her bedroom when I was alone in the house and put on some tights and the boots. I also tried out the mascara and even some false eyelashes that my mum had. It was a truly ecstatic feeling – a little moment when I could come out and play and it felt so good – a feeling of total release. There was no overt sexual element to this, as far as I recall, it was simply a feeling of thrill and excitement flooding my body – a rush of endorphins spreading tingling to every extremity. 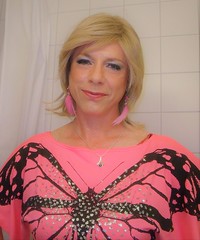