We normally think of ‘feminine’ in terms of gender, equating it with the female sex. In psychology it can be thought of as a type of psychic current that flows in our minds.

By psychic current I mean a stream of thoughts and/or feelings that originates somewhere in the back of the mind and flows along mental channels.

By mental channel I mean a sequence of thoughts on a particular topic, which is likely to trigger certain actions. For example a sexual urge, for a cross-dresser, may stimulate thoughts of dressing in women’s clothes or of looking at photographs of other cross-dressers.

By type of psychic current I mean one that is stimulated by or stimulates specific sets of symbols or behaviours. In the case of the feminine it includes feelings associated with motherhood, sex, intuition, etc.

In a cross-dresser this feminine psychic current produces a drive to dress in female clothes and take on the physical appearance of a woman, to some degree. Each cross-dresser typically has his own set of preferred stimuli, for example make-up, stockings/hose, shoes, etc. The act of dressing provides a channel in which the feminine current can flow.

We now what happens if a water current has nowhere to flow; it builds up pressure and eventually bursts through or overflows, often in an uncontrollable manner. The same is true of psychic currents. If they are not given a channel they will find their own and potentially cause problems such as depression, anxiety or mental illness.

On this basis we can say that cross-dressing provides a useful outlet for feminine psychic energy that could otherwise cause harm.

From a technical viewpoint what I am describing is the libido arising from the anima archetype and the personal (mediating) symbols with which it interacts on the borders of the conscious and unconscious. 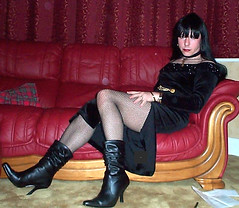